After World War One local residents, despite in many cases having very little money themselves, raised the funds through public subscription for the war memorial standing in Merriman Park.  The memorial was originally in front of the Mission Church.  When Vestry Road was to be widened in the 1970s it was moved without much planning to the large grass area near the main entrance to the Park where it remained until 2021.  For many years the annual Remembrance parade and service involved marching from the British Legion Club in Farm Road up to the Park to lay wreaths at the memorial followed by a church service in the Mission Church and marching back to the British Legion for refreshments.

At some point a search began by Street Parish Council, the British Legion and other interested parties to find a more prominent site for the memorial and over a period of around 8 years a number of locations considered including the pedestrian access from the top of Cranhill Road to the car park, the Library Garden and the Old Bowling Green.  For a variety of reasons no suitable site was found until the Shadrach Trust offered to have a new memorial within a small garden to be created at the side of the frontage to the United Reformed Church.  This was a more focal point in the High Street but the area was too small to take the memorial in Merriman Park as it’s column and cross were quite high.  It was therefore agreed to commission a new memorial bearing the names of all the fallen from the local area from WW1 to the present day and to then add any new names in future years.  John Candler, master craftsman produced the lovely modern and unique Portland stone memorial standing in the garden which is decorated with coloured glass poppies.  The total cost of £8,740 was met by Street Parish Council.  The memorial was dedicated at a special ceremony held on Saturday 14th July 2018 and attended by the Chair of the Council at the time, Cllr. Nina Swift, Mrs. Anne Maw, Lord-Lieutenant of Somerset and military and community representatives.

Also in March 2018 Historic England awarded the WW1 memorial listed building grade II status.  It could then not be moved or altered without special consent.  It was agreed to move it to the corner of the Park so that the large grass area could be used for activities including the annual Fun Day.  Due to the listed status and poor state of the stone the process was long and costly but finally the moving works were completed in time for a special service to mark the 100th anniversary of the memorial on 2nd October 2021.  The final cost was £22,500 but it should not need to be moved again and the layout of the Park has been much improved.

In 2019 and 2021 the Remembrance parade marched from the British Legion to the new memorial for the laying of wreaths, a church service in the United Reformed Church and then marched back.  There was no event in 2020 due to the Covid pandemic with only a handful of local representatives laying wreaths.  During both events it was clear that the garden and church were quite small and could not accommodate the large number of military and community representatives, young people and others.

It was therefore jointly agreed by the Council and British Legion on 1st December 2021 to recommend that future Remembrance events were held at the memorial in Merriman Park.  This was agreed by the Council on 7th December, 2021.  The parade will march from the British Legion up the High Street to the junction with Vestry Road and will halt while a few wreaths are laid at the new memorial.  It will then proceed up Vestry Road to the Park where there is plenty of space for everyone to assemble to see and hear the proceedings.  Wreaths will be laid and a service held in the Park.  The parade will then march back down and along Vestry Road to Leigh Road, pausing to acknowledge the memorial plaque on the former Strode School and at the Library Garden before returning to the British Legion for refreshments.  Merriman Park is a quiet place to hold the event with room to include everyone. 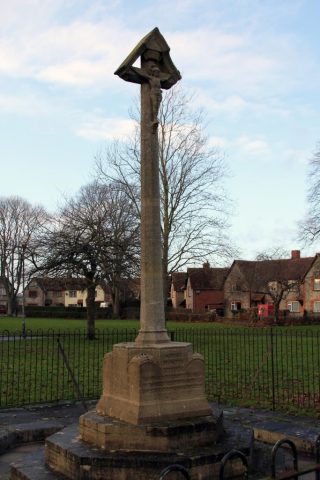